In  1990, the Awbrey Hall Fire, burned along the western flank of the city starting near Shevlin Park and stopping in Deschutes river woods subdivision.

The fire jumped three major roadways and the Deschutes River while burning 3,500 acres and 22 homes in 10 hours. It cost $2 million to suppress and caused $9 million in damage.

BEND, Ore. — Anyone who was living in Bend 20 years ago this week will never forget the Awbrey Hall Fire, which tore a destructive swath through the western edge of town, destroying 22 homes.
All remember how bad and frightening it was — and how much worse it could have been.
Tthe six-mile-long, arson-caused fire bore down on Bend’s West Side, threatening to raze subdivisions that interlaced the forested margin of the growing city. 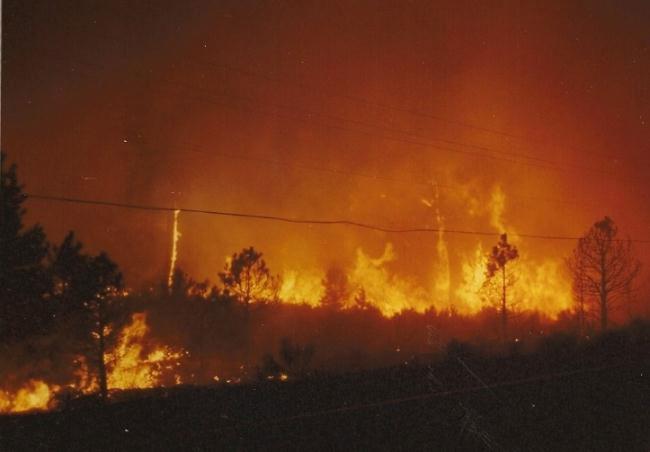 A photo of the western skyline of orange that Saturday night, Aug. 4, 1990, makes the frightening images of that night crystal clear.Many residents waited, agonizingly, for hours, not knowing if their homes were spared. Some were saved, but got so hot that, for example, plastic doorbells melted.

A recent KTVZ.COM story about a Deschutes River Woods woman who lost her home that night prompted memories from several others, shared on our [KTVZ.com] Facebook page.

“I remember seeing Awbrey Hall just starting,” said James Berry. “Saw it from the rooftop of Niswonger-Reynolds funeral home. Called 911. Also remember the long delay before I heard the sirens of the fire trucks going out to Awbrey Hall. Too long of a delay, if you ask me.”
Sheila Hanson Larson wrote, “I lived on Newport Avenue, and I remember a solid stream of heavy equipment going up Newport all day and night.”

“The town was surrounded by flames,” she recalled. “It was pretty scary! I was also 8 months pregnant, so I remember it well!”

Janelle Wriglesworth Leeden said, “I remember being on Pilot Butte, watching the inferno with all of my pals — (the fire) moving at Mach 10 from Lava Butte,jumping over Cascade Lakes Highway.”

“I looked off to the west and here’s a little puff of smoke. That puff of smoke went from one acre to 10 acres to 100 acres in just about five minutes — just incredibly fast,” he said.

The blaze actually hopped Cascade Lakes Highway and surrounded the Entrada Lodge with flames. Newspaper reports the next day erroneously said the lodge had been destroyed, but crews were able to quickly extinguish a fire that jumped from brush to the hotel’s roof. 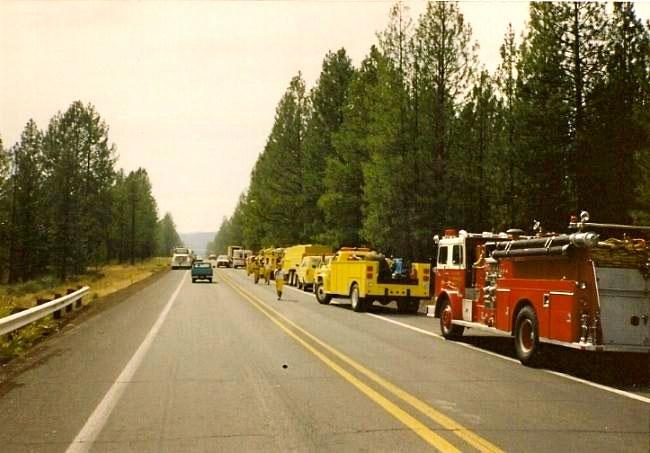 Awbrey Hall Firefighters with their equipment in Bend Oregon

Nearly 3,000 people were evacuated from threatened homes that night, many in Deschutes River Woods, where residents recall huge traffic backups as drivers waited to turn left (north) from Baker Road onto Highway 97, toward Bend. Some officials feared an inferno could reach those trapped in their idling cars. (An emergency secondary exit was created years later, and officials focused on making sure neighbors didn’t have only one way in or out.)

John Jackson, a wildfire consultant, was working on the Awbrey Hall fire crew that night and remembers the scene vividly.

He also remembers how it could have been much worse

Though Department of Forestry and city, rural and federal fire crews and equipment battled the fast-moving fire, a quirk in the weather proved the saving grace.

“The thing I kept waiting for was the wind to shift around to the west. which would have put the whole broad side of the fire head on into downtown Bend … because that would have been catastrophic,” Jackson said, looking over a ridge he remembers being fully engulfed in flames.

It was not the first — or the last — wildfire to take Central Oregonians’ homes. And while Awbrey Hall thankfully claimed no lives, others in Oregon have been deadly.

The 1996 Skeleton Fire burned nearly 18,000 acres on the eastern flank of Bend, and 30 structures were damaged or destroyed. An Oregon Department of Forestry summary of wildfires noted, “This wind-driven fire accomplished most of its damage in just a few hours, but for a time kindled fears that its destructive toll would be far worse than Awbrey Hall’s. Awbrey Hall had burned from north to south and skirted the western edge of the city, whereas Skeleton started on the eastern edge and burned west, heading for the heavily populated southern half of the city.”

Central Oregon learned many lessons from that 3,500-acre fire — the words “defensible space” are etched into many people’s way of life. The FireFree effort and Project Wildfire offered lessons on how to create a safe zone around homes, and yearly free disposal of yard debris to make it easier to keep those areas clear of fire fuels.

Also, neighborhood rules that often required the woodsy feel of a wood-shake roof, to blend into the woods, did a 180-degree turn, with bans on such roofs in many communities and subdivisions.

Once forestland-urban interface areas are identified, a committee applies fire-risk classifications to the areas, from “low” to “extreme,” and the classification is used by a property owner to determine the size of a fuel break that needs to be established around a structure.

Once maps are finalized, the Oregon Department of Forestry assumes administrative responsibility and notifies the owners of properties within the county’s forestland-urban interface areas. Property owners have two years after receiving their letter of notification to comply with the fuel-reduction standards.
Certification relieves a property owner from the act’s fire cost-recovery liability. If that doesn’t happen, the state may seek to recover some fire suppression costs — up to $100,000 — from a property owner if a fire originates on the owner’s property, the fuel reduction standards have not been met, and ODF incurs extraordinary suppression costs.

So there’s a carrot and stick approach – the carrot of a safer home, the stick of a potential big bill. But as years go by without a major destructive fire, and the inevitable turnover of newcomers to the High Desert, many wonder if it will remain a high enough priority with enough people to make the area safer.

Below is a wonderful YouTube video compilation of the Skeleton Fire by John Valenti, with home footage and various newscasts; locally and nationally.